What About The Students Destined For Failure 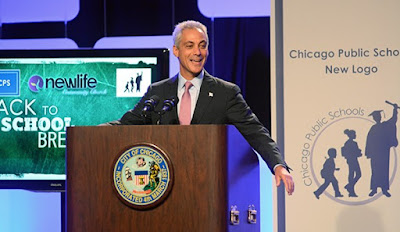 Chicago Mayor Rahm Emanuel made a speech in Washington DC touting the achievements of the Chicago Public Schools.  It was a good speech hyping the many type of schools parents can choose for their children.  However Mayor Rahm Emanuel did not say much about the 25 percent of the students in his city are never going to be anything, never going to amount to anything.   These are the public school students that may become Chicago’s future neighborhood criminals.

In 2012 Mayor Rahm Emanuel told Chicago Teacher's Union President Karen Lewis “25 percent of the students in this city are never going to be anything, never going to amount to anything and he is never going to throw money at it."  This is the challenge for public school systems that have large numbers of low income students who are not motivated and have overwhelmed or indifferent parents.  America’s States and Cities would rather push these students out of their school system and into their prison system.  Knowing that their parents and their community are too overwhelmed and indifferent to demand that their political officials redirected funds to create an education model for students that seem destined for a life of failure.

You’ve got to have three things, an involved parent, a teacher that will motivate you and a principal that will be held accountable.
Chicago Mayor Rahm Emanuel
This 01:13 video clip, title, and description were created by Marc Sims.
https://www.c-span.org/video/?c4675739/educating-urban-students


In a NBC 5 interview Chicago Teacher's Union President Karen Lewis Mayor Rahm Emanuel said;
"In that conversation, he did say to me that 25 percent of the students in this city are never going to be anything, never going to amount to anything and he is never going to throw money at it."

One-third of all African-American students have left CPS

Nearly 83,000 black students — more than one-third of all African-American kids in the district — have left CPS since 2000. On average, black students score lower than their peers. Latinos are now CPS’ largest ethnic group, and they’ve posted higher scores and big gains over time.

Rahm Emanuel on Education Initiatives Chicago Mayor Rahm Emanuel (D) talked about new initiatives for education and college preparedness. One of the mayor’s initiatives would require Chicago public high school seniors to have a post-graduation plan in place before graduating.
https://www.c-span.org/video/?429881-1/rahm-emanuel-addresses-national-press-club