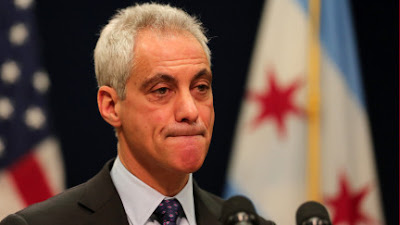 I think Rahm Emanuel is a good mayor for most of Chicagoans.  He is a very smart, well connected  political and business operative. Chicago needs a mayor that caterers to the business community and tourist. Chicago also needs a mayor that will address the concerns of the underclass, the working class, and other citizens that cannot, or do not vote.


The mayor would not be in political trouble if he was a likable champion of Chicagoans who are not affluent.  The mayor probably thought he could get by with just schmoozing Chicago's lower income residents.   Now Mayor Emanuel's political calculating could be his undoing.


Mayor Emanuel could redeem himself if he started a process that would weed out all disrespectful and abusive police officers. Also implement a program that would ensure all Chicago Public School students can at least read and write at grade level.

Harry, you go around sometimes, kids are growing up in an environment in parts of the city that you wouldn't let your own kids grow up in. There's no sense of life, and there's an emptiness in their eyes that you don't know if you can change. And they can see downtown; and yet, for them, it's miles and miles away. And I don't ever want a city that for some of our children they don't think they're part of that. And I don't know whether I have the ability to affect that.

In a NBC 5 interview Chicago Teacher's Union President Karen Lewis said Mayor Rahm Emanuel said; "In that conversation, he did say to me that 25 percent of the students in this city are never going to be anything, never going to amount to anything and he is never going to throw money at it."