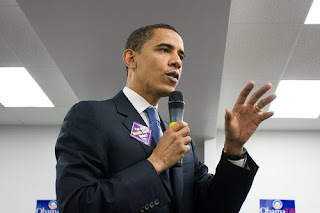 Although unemployment may remain high and the average American’s standard of living will remain stagnant, it is time for President Obama to become more proactive and lead!

“Leadership is a word and a concept that has been more argued than almost any other I know. I am not one of the desk-pounding types that likes to stick out his jaw and look like he is bossing the show. I would far rather get behind and, recognizing the frailties and the requirements of human nature, would rather try to persuade a man to go along, because once I have persuaded him, he will stick. If I scare him, he will stay just as long as he is scared, and then he is gone.”

Dwight David Eisenhower
Posted by Marc Sims at 8:46 AM